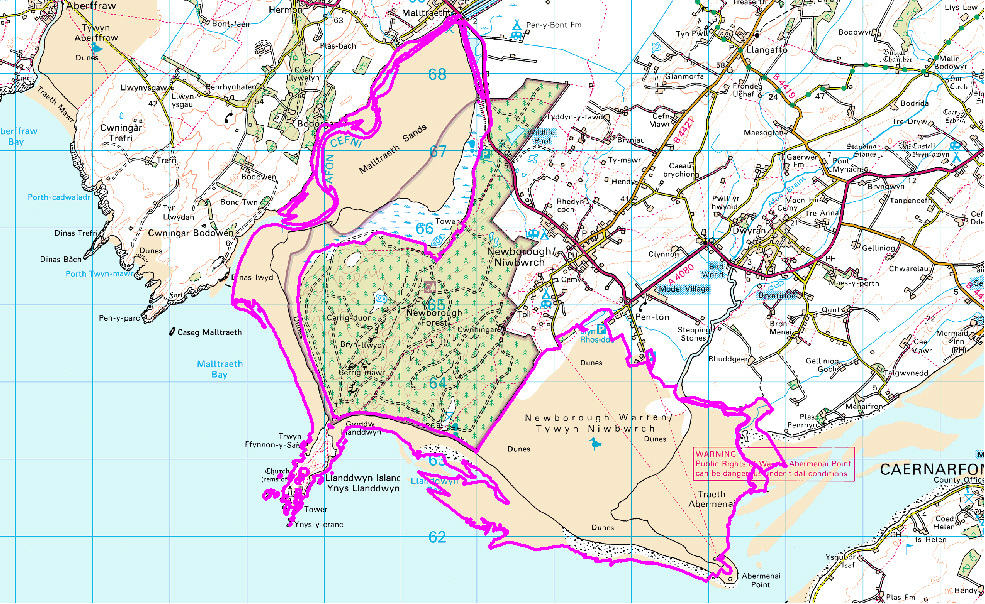 Map reproduced by permission of Ordnance Survey ® on behalf of the Controller of Her Majesty's Stationery Office. © Crown copyright. All rights reserved. License number 100044910.

sand-dunes and estuaries on the southern tip of Anglesey is a superb area of wild country. There are fine examples of dune development from the early successional foredunes through a series of at least 4 lines of parabolic dunes with intervening wet dune slacks (valleys) and dune grassland. The whole system is defined by the two estuaries - the Afon Cefni to the north and the Afon Braint and Menai Strait to the south which both serve to pump sand back into the near-shore zone where is re-supplied to the beaches. The dune landforms (and the processes that create and maintain them) are classic examples of coastal dunes, of national importance. What appears from the ground to be a confused jumble of hills reveals its true pattern only from the air. The dunes are draped around an underlying ridge of hard rock - which outcrops as Ynys Llanddwyn and displays fine examples of "pillow lavas" - lumps of viscous lava extruded from volcanic vents onto an ocean-floor in successive layers so that each lump reflects the shape of underlying piles of lava. Study the outcrops on the beach near the start of the island.

The dune flora is best seen during the spring and early summer and includes a fine suite of orchids including early purple orchid, bee orchid, marsh heleborine and lesser twayblade. There is a diverse invertebrate fauna, particularly of species dependent on warm bare sand. Skylark are still common here.

A small lake, Llyn Rhos-du, occurs at the landward side of the dunes near Pen-lon. A hide provides opportunity to watch tufted duck, wigeon, heron and many other birds.

The reserve includes the beaches and the island - Ynys Llanddwyn - which attract thousands of visitors every year. There is a small exhibition, in the old Pilots' Cottages on the island, describing the natural and human history of the area.

There are several public rights of way across the dunes giving good access to examples of all the habitats, and a route across the Braint estuary at low tide. More general access to the dunes is not encouraged - particularly when dogs are involved in the nesting season. There is also access for the public on the beaches and intertidal areas and surfaced paths around the Ynys Llanddwyn. See  walks

Much of the dune land is grazed with Welsh Mountain ponies, cattle and sheep at various times to maintain short dune vegetation. As part of a long-standing agreement with wildfowlers, the Cefni Estuary has a winter wildfowling zone under a strict permit system and the Braint Estuary is a wildfowl sanctuary zone.

Some 700 hectares of dunes adjacent to the NNR was afforested between 1947 and 1965 in an effort to stabilise the formerly mobile sands - though the demise of rabbits due to myxomatosis and other changes in the ecology of the dunes seems to have achieved this elsewhere. The conifer plantation has smothered the original dune vegetation in a thick layer of needles, prevented natural movement of sand and lowered the ground water. But it is a pleasant environment for walking and cycling, and not without some recent wildlife interest of its own, including woodland fungi and the recently introduced red squirrel, so its management (by the Forestry Commission) is a controversial subject.